Beautiful One by Mary Cope Html

Transformation, empowerment, love and music come together in the book, Beautiful One. Elizabeth Ryan is a beautiful, shy, naïve high school senior. Having never dated she meets the boy of her dreams, Aidan Mitchell. Despite his history of womanizing Liz is drawn to him. Soon Liz becomes the envy of all the girls on campus, when they become a couple and her dream boyfriend sweeps her off her feet and into the dating world that is all too new and strange for her. When other guys start to take notice of Liz, Aidan is troubled with fits of jealousy. Elizabeth then meets the ruggedly handsome, Spencer Hayes and they quickly bond over their passion for music. Liz begins to struggle with the feelings that spark between them. In the end Elizabeth finds herself torn between helping Aidan overcome his jealousy and anger and giving into what her heart truly wants. 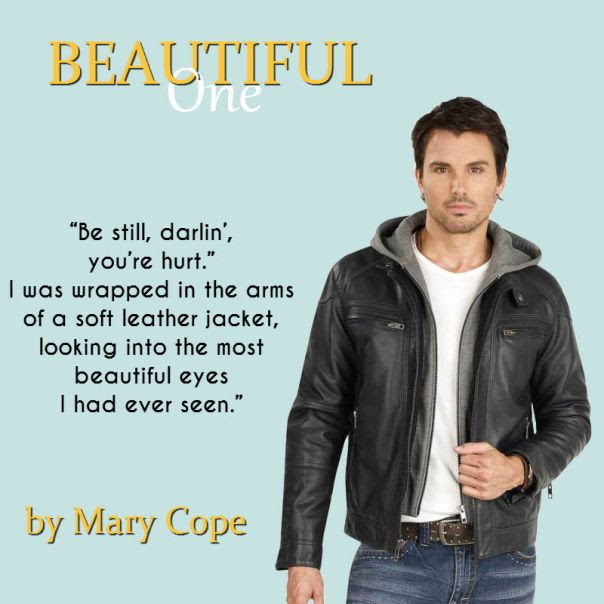 The faint sounds of a guitar drifted through the walls of my bathroom as I savored the last of the hot water before it became lukewarm. Stepping away from the spray, I turned the shower knob and watched the droplets trickle down the drain. Inhaling a deep breath my mind focused on one thing. Aidan Mitchell. Hearing Mason’s band practicing meant he would be here. I was ninety-nine percent sure Aidan wouldn’t blow off their practice. He knew how serious my brother was about the band, but he also had been avoiding me for days. The past week had been awful. I was determined to talk to him. All I wanted was a few answers. My emotions had run the gamut from confusion, frustration, regret, and sadness… sadness consumed me most of all, at night usually, and I was exhausted from it. But at this moment all I felt was anger. Anger was good. It was certainly better than pain. As I rushed down the hallway, the floorboards creaked beneath my feet and the walls began to vibrate with the beat of Derek pounding on the drums. When I entered my room the music was deafening, but today I didn’t mind. I untwisted the blue-and-white-polka-dot towel from my head and tossed it to the floor. The deep conditioner I used helped my fingers glide through my long damp curls. If I was going to confront Aidan, I wanted to look my best. No Frizzy Lizzie for me. That nickname, coupled with my big butt, had tormented me, growing up in a beach town surrounded by beautiful people. I had longed to look like a typical California girl: tall, blond, perfect. But, with dark hair and bordering on five feet three inches, that was never going to be me. After I blow-dried and flat-ironed my hair, I took off my purple robe and draped it over my desk chair. I slipped on a pair of jeans… yes, slipped them on. I didn’t have to tug, pull, or jiggle my butt to get in my pants anymore. When I easily pushed the button through the top of my jeans, it still made me smile. I couldn’t even count how many times I had to lie on my bed and suck in my stomach so I could zip up a pair of pants. Every time I slipped them on, I never took it for granted. I had worked my butt off… literally. I put on my bra and a green sweater before I pulled on my boots. I rushed downstairs to the door that led to the garage. Thinking about confronting Aidan and having to stare into those piercing blue eyes started to intimidate me. But this was my chance. I knew he was a few feet behind the door, and I needed to deal with him. Before I completely lost my nerve, I inhaled a deep breath and exhaled then pushed open the door. The stream of sunlight coming in through the open garage door blinded me for a moment. With squinted eyes, I made a beeline to the old brown sofa in the corner. My heart was beating so fast it almost seemed in tempo with Derek pounding the drums. I scooted over our yellow Labrador, Maggie, and wedged myself between her and the arm of the couch. Finally, I looked up to focus my attention on Aidan. He didn’t show. I sunk my head back into the cushions, exhaling a deep, long sigh, trying to rid the tension from my body. The guys were practicing their newest song. Indie-Alternative was their style, and they called themselves Random Plan. I glanced at Mason and could tell he was angry. I mouthed the word “Aidan?” Mason just shook his head. “Derek!” The tone in my brother’s voice made me sit up straight. “Derek!” Mason snapped again. Finally Derek stopped and silenced his cymbals. “What?” He lifted the front of his black t-shirt to wipe the sweat from his forehead, exposing his six-pack. His brown eyes bored into Mason’s. “Hey! Just ‘cuz you’re ticked off at the pretty boy, don’t take it out on me.” Derek reached back and grabbed a water from an old bookcase that held a few water bottles, electrical cords, an old CD player, and a collection of CDs. “Hey, Kyle, ya want one?” Kyle nodded and Derek tossed one across the garage to where he stood behind the keyboard. “Mason?” “Yeah, I’ll take one… Sorry, Derek.” Derek gave Mason a head nod and tossed him a bottle. He took a sip while Derek chugged his down. “Okay, start again.” Mason commanded. Derek picked up his sticks and began tapping. I leaned my head back, closed my eyes and listened to the music. Funny, I’d come into the garage so fearless it almost made me laugh. Who would have thought the once-overweight Elizabeth Ryan would stand up to the likes of Aidan Mitchell? I smiled to myself, allowing my mind to drift back to the time when I’d found it hard to even look at him... 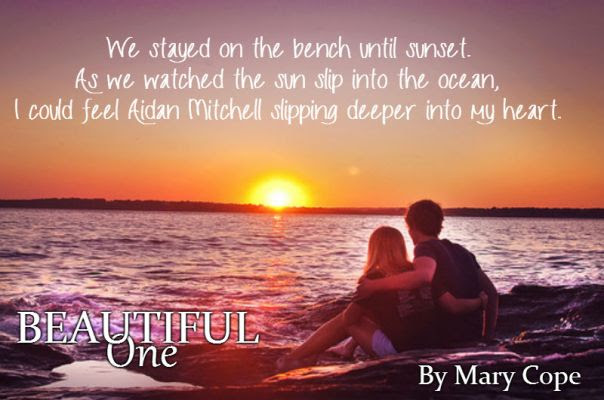 Mary Cope is a freelance writer of romance. Her book, Beautiful One, is the first in a planned trilogy. She is currently writing, Beautiful Mess and Beautiful Life will follow. Mary enjoys spending time with her family, baking gourmet cookies, listening to music and taking long walks with her yellow Labrador, Maggie.

Posted by PNR Book Lover Reviews at 6:47 AM