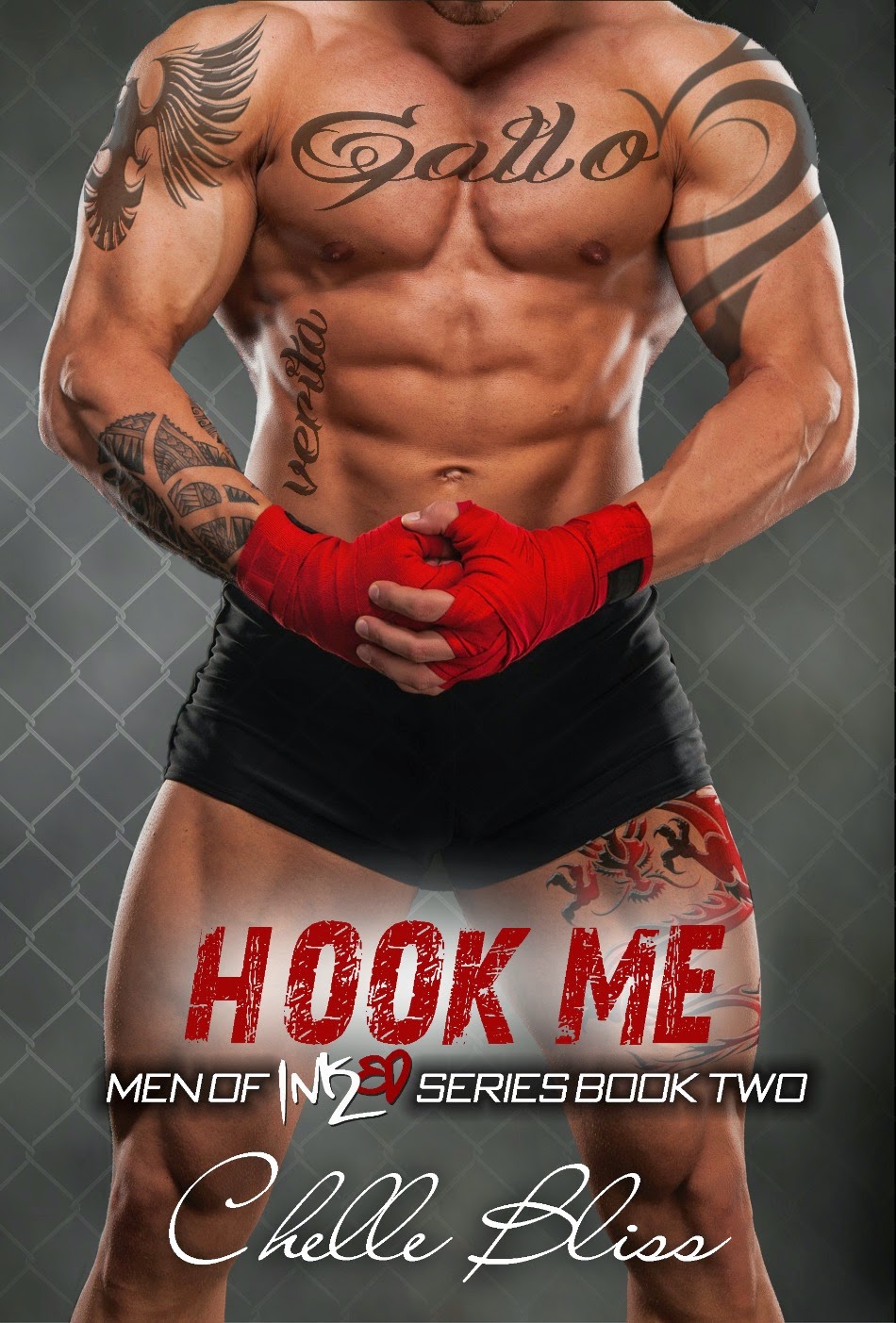 Michael Gallo found his calling in life – he wants to kick ass. He works at Inked as a piercer, but spends his mornings training and dreaming of winning an UFC championship. Michael is the road to achieving his goal when a chance encounter alters his world forever. The title is no longer enough – he must capture the woman of his dreams.

Dr. Mia Greco is dedicated to saving lives and helping those less fortunate. She doesn’t have time to meet Mr. Right with her busy schedule. She buries herself in her work and helping humanity. Fate steps in and sweeps the carpet out from under her. She tries to deny the pull to him, a man that uses his fists for gain, but the universe won’t let her walk away so easy and Michael isn’t one to take no for an answer.

His past is filled with darkness and a secret that may rip them apart. There are forces bigger than them at work; drawing them in and making their worlds collide – not letting either one of them walk away.

The latch snapped. I could do this. The nearness of him dulled my fear.

His fingers brushed against my mound, sending an electric current through my body, as he grabbed the latched. “Safe and secure,” he said, pulling on the latch with a chuckle.

I opened my eyes and looked down at him. “I wouldn’t use either of those words right now,” I said as I smacked his shoulder.

I wasn’t talking about parasailing either.

“Come on, beautiful. There’s no turning back now. Up ya go,” he said, grabbing my legs and throwing me my over his shoulder.

I squealed as I flopped against his body, my chest colliding with his shoulder. I smacked his back; bouncing as I kicked trying to break free. “Put me down!” I yelled and laughed.

“My view is too damn good to do that, Doc,” he said and swatted my ass.

“Pig.” I reached down and tried pinched his ass.

Fucker was rock solid and I could barely get enough between my fingers.

“Nice try,” he said, unaffected by my effort and swatting me on the ass again.

I yelped, the sting from palm making me wish I could reach back and rub the tender spot. “Ugh,” I said as I bounced and grew slack in his arms, finally defeated.

The beach disappeared as he stepped on the boat. “Will you put me down now, please?” I asked, trying to sound sweet as sugar.

“If I must,” he said before placing a light kiss against my hip.

I closed my eyes and tried not to think about it, about him. The feel of his mouth against skin that hadn’t been touched in so long had me at my breaking point.

He wrapped his arms around my legs, pushing the harness into me, before pulling my body down against him. He controlled the speed, making the journey to my feet as drawn out as possible.

By the time my feet touched the boat I forgot how scared I had been. The sexual frustration I felt trumped everything. “You’re not safe,” I whispered as I looked up at him with one eye, the sun behind his head almost blinding me.

He laughed, pulling me against his shaking body. “Doc, I’ll make sure you survive the trip up there.” He bent down rubbing his nose against mine.

“It’s not the ride I’m talking about, Michael.”

“I know.” He smiled and kissed me, his lips shaking under mine from the laughter still rumbling through his chest.

♥Buy book 1 of the Men of Inked series♥ 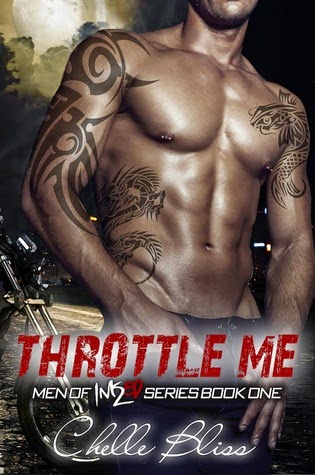 Suzy’s a control freak and has her life mapped out - work hard, find a man with a stable job, and live happily ever after. She’s content with the status quo, but her plan comes to a screeching halt when he enters her life and turns it upside down.

City gave up on love when his heart was crushed in college, preferring to be the typical bachelor. He spends his nights hopping from one bed to another and his days working at his family tattoo shop, Inked. A chance encounter on a dark road makes him question what he had sworn off forever – a relationship.

A night of passion and lust causes them to question everything. Is City the knight in shining armor to the damsel in distress? Can their relationship survive when a fantasy falls apart and a secret comes out that changes everything? 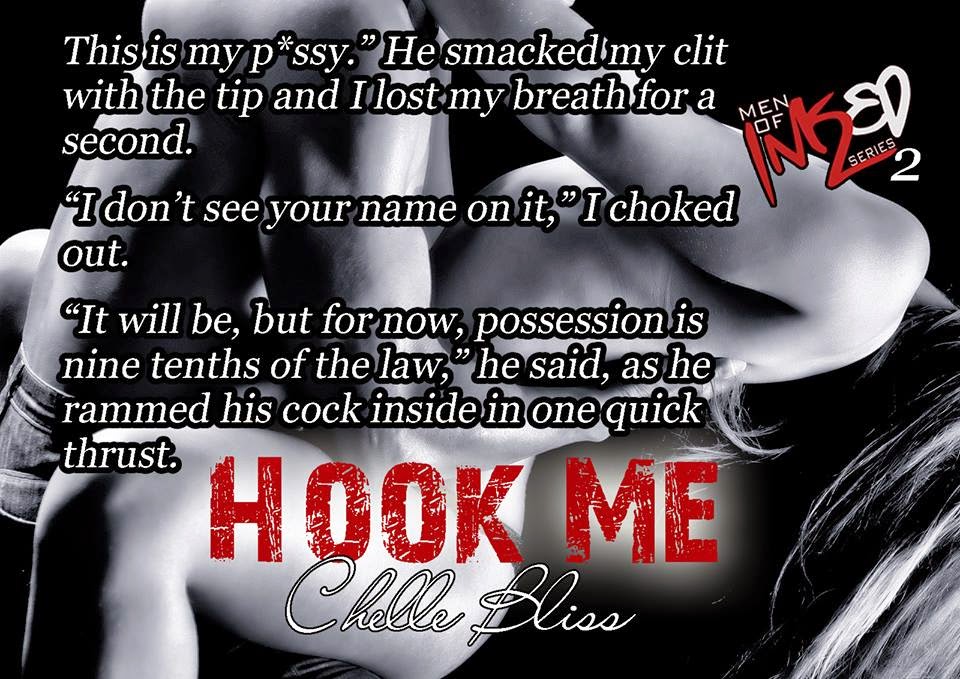 Chelle is an avid reader; consuming contemporary romance, dark reads, young adult, and all things erotica. She wants to create a book filled with characters that readers could relate to with real world problems and matching wallets.

Chelle loves to travel and her favorite cities are New Orleans and Paris. She currently lives in Florida with her amazing boyfriend. He’s showed her the love and passion that she has poured onto the page.

Well Chelle Bliss knocked it out the park with Throttle Me.....this time she's knocked me on my ass with Hook Me...woman your gunna kill me with this series....but damn what a fine way to go...if I could give Hook Me Fifty stars I would!!!

Now let's get to the juicy bit....but don't panic there's no spoilers here I want you to get hit full on by Michael...

He's tatted, he's smoking hot, he's all frickin kinds of sexy and yes my fave he's alpha....ok maybe a little spoiler so you get a little taste of all that's Michael....

"It will be, but for now, possession is nine tents of the law," he said, as he rammed his c*** inside in one hard thrust.

So do you see this isn't just any read...this is a foo foo clenching melt your panties off read, so brace yourselves maybe have B.O.B on standby cause trust me your gunna be grateful for this bit of advice.