Hey, everyone. Craig Hart here. I was the

third member of the first ever “Clan”.

For those who didn’t read about the Hart Clan in A Love Worth Biting For, a Clan is basically a group of misfits. Usually a Vampire group is called a Family, and a Werewolf group is called a Pack. When my Alpha female, Amber, became a hybrid and started her own group she decided it would be called a Clan.

At first, I thought being led by a hybrid would be fascinating and ground-breaking. My wolf seemed to want to follow Amber’s lead too.

Turns out the only things my Alpha female breaks are beds.

Guess who has to figure out how to pay for that? That’s right…me. *sigh* I have always been good with finances, and it’s a damn good thing too. My Alpha and her mate are making me get creative.

I would love to break things in the throes of passion, but I have family issues to take care of. You think introducing your girlfriend to your parents is awkward? Try having your parents try to sell your woman into blood slavery.

To top it off, I can’t even get drunk to deal with all this. Damn werewolf metabolism. I have to talk about things. And all I seem to need to talk about is a hot little witch named Mary.

Roxy wrote down the story we told her. I tried to have her keep her mouth shut, but she’s as difficult as Amber is. Roxy is hard at work over-sharing more of our lives right now, but she said I could give away a prize or something.

How about money? I wish someone would give me money…

Leave a comment below for a chance to win a $10 Gift Card (Amazon, Barnes & Noble, or Samhain Publishing).

I’d love to stay and chat, but I’ve got to go pay for another hotel room we ruined.  And…wait…is that smoke I smell? Shit. I gotta go. 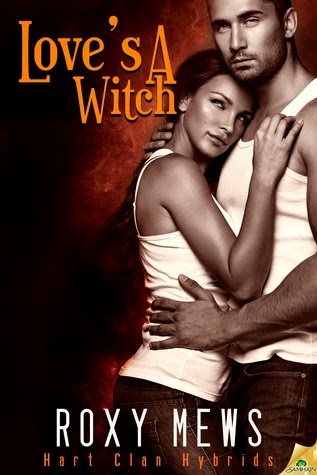 Blurb:
You can’t outrun love, especially when it runs on four legs.
Hart Clan Hybrids, Book 2
Since a very real set of vampire fangs sank into her arm, Mary Fields has accepted that she’s part of a magical world where all her dreams and visions finally make sense.
As she journeys to find a Wiccan mentor who’ll help her get a handle on her new powers, she clings to the one relic from her former life—a sketchpad. She also tries to ignore the red mating aura she’s beginning to see around her only companion on the trip—the hottie she used to read to at the library.
Mary’s readings were once a fun distraction from the cruel joke the supernatural world played on Craig Hart. He’s supposed to protect her from vampires out to make her their personal blood supply, yet he can’t bring himself to keep his paws off.
As Mary digs deep for the inner strength to protect herself, one stumble off her magical path sends her straight into Craig’s arms. Where love burns…but so does a truth that could turn that red mating aura into a river of blood.
Product Warnings
This book contains outdoor sex without the benefit of bug spray, and erotic biting that could result in involuntary eruptions of fur.


Posted by PNR Book Lover Reviews at 8:59 AM