Hawk (Sons of Sangue) by Patricia A Rasey 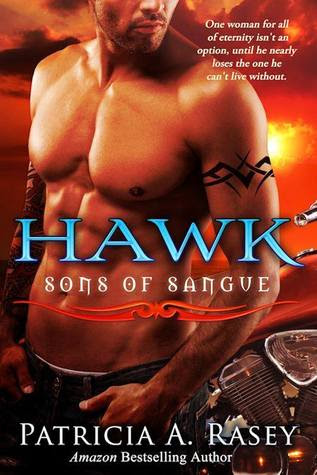 Kaleb “Hawk” Tepes, as president of the Sons of Sangue and descendant of Vlad III, needs to keep his head focused on club business. Trouble is someone wants to divest him of it for a crime he committed against his vampire predecessors. He can’t afford distractions, especially those that come in the form of a five-foot-two sprite named Suzi, who once belonged to his nephew. In a moment of weakness, he makes a snap decision that can only spell trouble. Now faced with the one person who wants him dead, Kaleb must make the ultimate sacrifice or chance losing the only woman he truly desired forever.Suzi Stevens has tried hard to put her past behind her and move forward. The one man she yearns for over all others, believes her to be nothing but cold-hearted. Hearing that someone has tried to behead him, she shelves past prejudices and rushes to his side, needing to see for herself that he’s all right. What she doesn’t count on is Hawk’s demand to take her as his personal blood donor. Now forced to endure his company, she fears losing her heart for all eternity to the one person who has the power to crush her.

“I didn’t come here to bring up old wounds.” “Then why are you here?" “Because I fooled myself into thinking I cared…” She stopped herself from saying about you. “I heard about Wheezer and Red Dot. I had to come to see if you were all right. I’m sorry now that I did. I should’ve let you wallow in your self-hatred.” He stared hard at her, enough so she wished she could read what was going on behind those black hypnotic eyes. She wasn’t sure if he wanted to leap the counter and strangle her, or kiss her senseless. Though she preferred the latter, Suzi knew the repercussions of those actions would crush her. Before she could stop him, he vaulted the bar effortlessly and now stood mere inches from her. She could smell Jack Daniel’s on him, that and his intoxicating musk. Her heart nearly leapt from her chest. Kaleb leaned in, his nose brushing the soft skin beneath her right ear, causing a flutter in her lower abdomen. His canines scraped across the delicate flesh, telling her he was a hairsbreadth away from biting her. “I find I’m ravenous.” “Your problem, not mine.” Suzi stiffened her spine, ready for him to do as he desired regardless of her wishes. “I didn’t come here to offer you nourishment.” His right arm snaked around her, keeping her from fleeing. The fingers of his free hand toyed with the glass vial. “You’re a donor. You offer me what I need.” “I can’t stop you from feeding.” “I hear a but in there.” “I’m retired.” Kaleb stood back, releasing Suzi to stare down at her. Then he chuckled. His mirth misplaced given the situation. “I don’t find that funny.” “No?” He raised one black brow. “I find that rich. Suzi Stevens who offered her blood up to any Son who asked.” Her brows drew together. “It’s what a donor does.” “Yes, their blood … but not always do they spread their thighs.” “I am so done here. Go fuck yourself, Hawk.” When she turned to leave, Kaleb gripped her wrist and spun her back into his hold so that her back nestled against the erection he didn’t try to conceal. She knew he might not like it, might even hate the idea, but he desired her. “I told you, I’m hungry,” he whispered. His warm breath passed over the shell of her ear. An ache settled between her thighs. She’d die first. “And I told you I retired myself.” “Then I just un-retired you.” And with that, he sank his fangs into the soft spot just beneath her ear.

“Well?” She drew his gaze upward. “Let’s get this the hell over with.” “You have somewhere else you need to be, piccolo diavolo?” “Maybe I do. But it sure in the hell does not include standing here having a tête-à-tête with you.” And the quicker she got him taking his fill, the sooner she could stop thinking of him in the horizontal with her straddling his lean hips. What the hell were those love handle things anyway that rode just above his jean line? Lord, those made her want to follow the muscle line with her tongue straight to his… Enough! At this rate, she’d never make it out of here unscathed. Remember why you hate him. Kaleb set the two wineglasses on a round table, uncorked the bottle and then poured them each a glass, before handing her one. Suzi quickly shook her head. Too much wine and she’d be promising Kaleb her tomorrows. “None for me. I’m not here to fraternize. Take what you came here for and I’ll be on my way. Don’t make this harder than it has to be, Hawk.” “It’s Kaleb to you.” “You will always be Hawk to me.” She caught a glimpse of his extended fangs as he took a swallow of the deep red wine then licked the remnants from his lips. His prominent brow only enhanced his dangerous look. And he called her little devil? He looked like the beast himself as his obsidian gaze seemed to swallow her whole. “It’s all the same, piccolo diavolo. But when I’m fucking you, I’d prefer you to call me by my given name.” “Well, then … no worries there, Hawk.” Suzi winked at him, then walked over to the end table and grabbed the other glass of wine, downing the contents in one swallow. If she were to endure his company, then she might as well do it with good wine. Tilting her head to the side, she asked, “Shall we?” “You are one cold-hearted bitch.” “It takes a cold heart to know one.” 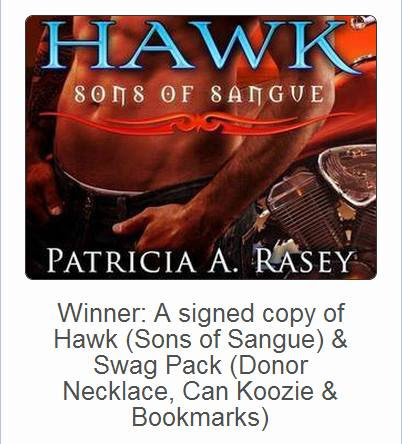 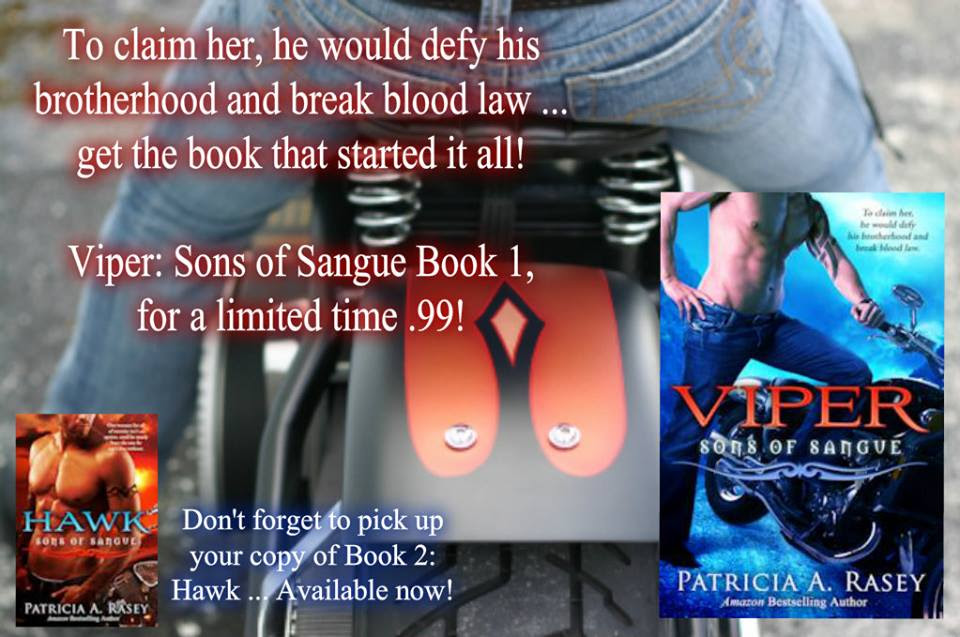 A daydreamer at heart, suspense author, Patricia A. Rasey, resides in her native town in Northwest Ohio with her husband, Mark and her lovable Cavalier King Charles Spaniel Todd. She has two adult sons she is extremely proud of and are actively making their own paths in life. At the age of twenty-nine, her boys both tucked away in school all day, she decided to put her creative writing studies to use. A graduate of Long Ridge Writer's School, Patricia has seen publication of some her short stories in magazines as well as several of her novels.

Ms. Rasey is a three-time recipient of the Word Weaving Award for Literary Excellence and a three-time winner of the prestigious RIO Award Of Excellence. She is also a three-time EPPIE finalist and was a 2001 nominee for Romantic Times Magazine's Best Electronic Book. Additionally, Twilight Obsessions and Twilight Visions, two anthologies she was a part of, was nominated for the PEARL, the Paranormal Excellence Award in Romantic Literature, in the Best Anthology category. Her short story, In The Mind of Darkness won the P&E 2002 Horror short story category.

When not behind her computer, you can find Patricia working, reading, watching movies or MMA. She is currently a third degree Black Belt in American Freestyle Karate.

-- Deadly Obsession (currently not available). -- Kiss of Deceit. -- Facade. -- The Hour Before Dawn, sequel to the best-selling Deadly Obsession (currently not available). -- Eyes Of Betrayal, sequel to the best-selling Kiss Of Deceit. -- Love You to Pieces (not yet published). -- Lawfully Yours, her first historical romance. -- Eternally Yours, sequel to Lawfully yours. -- Dark Savior.

...As well as the novellas and award winning short story... 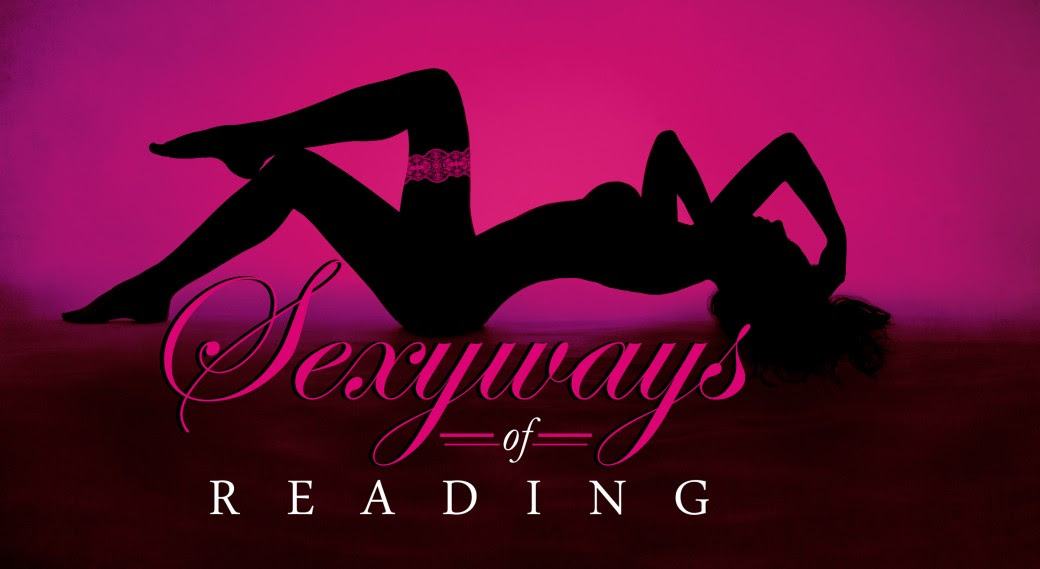 Posted by PNR Book Lover Reviews at 8:05 AM