Review Tour, My Name was Karl 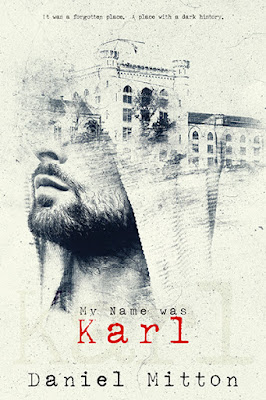 It was a forgotten place. A place with a dark history. Thousands of men had passed through its doors during the first three quarters of the twentieth century. Most had served their time and moved on. But not all had been so fortunate.
As the years ticked by and the seasons changed, the old prison moldered away, but one thing stayed constant.

In the deepest part of the night, on the darkest nights of the year—particularly in spring, if you were sensitive enough to hear them—sounds could be heard coming from the deepest bowels of the lowest level basement. All was not right. Something was waiting, alone in the darkness.
Waiting for someone to finally hear its sorrow.
When Petty Officer Ben Pierce decided to explore the long abandoned Naval Prison next to his decrepit barracks, the last thing he expected to find was a mystery.
Something is in the Prison. Or is it some one? Where is the weeping coming from? When Ben follows the sounds to an ice cold, but empty, cell, he isn’t sticking around to find out any more details.
But now he can’t get it out of his mind.

Daniel Mitton is not a statistic. When the doctors broke the news to him that he would be dead by the end of 2013 from brain cancer, he scoffed at them. He has proven them incorrect, and continues to prove them more incorrect every day.

He is now pursuing his lifelong dream of telling other people his stories in writing. His overactive imagination used to get him in trouble. It will be interesting to see what happens this time.

My Name Was Karl is his first self-published work, but he already has two other books in a queue somewhere at a publisher.

Daniel was born and raised in northern New Hampshire, but now lives in sunny Southwest Florida with his husband of nearly twenty-eight years. He totally doesn’t get why some people complain it is too hot in Florida!


Posted by PNR Book Lover Reviews at 9:07 AM