In Lost Rider, the first Western romance in New York Times and USA TODAY bestselling author Harper Sloan’s Coming Home series, an injured rodeo star encounters an old flame but will she be just what he needs to get back in the saddle?

Maverick Austin Davis is forced to return home after a ten-year career as a rodeo star. After one too many head injuries, he’s off the circuit and in the horse farming business, something he’s never taken much of a shine to, but now that it’s his late father’s legacy, familial duty calls. How will Maverick find his way after the only dream he ever had for himself is over?

Enter Leighton Elizabeth James, an ugly duckling turned beauty from Maverick’s childhood—his younger sister’s best friend, to be exact, and someone whose heart he stomped all over when she confessed her crush to him ten years back. Now Leighton is back in Maverick’s life, no longer the insecure, love-stricken teen—and Maverick can’t help but take notice. Sparks fly between them, but will Leighton be able to open her heart to the one man who broke it all those years ago?

Written in the vein of Diana Palmer and Lindsay McKenna, this Texas-set series is filled with sizzle, heart, and plenty of cowboys!

ABOUT THE AUTHOR:
Harper is a NEW YORK TIMES, WALL STREET JOURNAL and USA TODAY bestselling author residing in Georgia with her husband and three daughters. She has a borderline unhealthy obsession with books, hibachi, tattoos and Game of Thrones. When she isn't writing you can almost always find her with a book in hand. 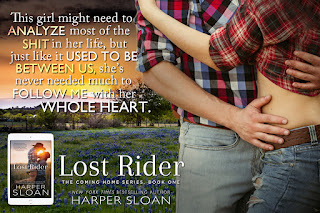 Lost Rider, with Maverick and Leighton was defiantly a roller coaster, one that I’m still un sure I enjoyed!
I found this story to be very slow building, and at times I was not fully invested in the story. It took me a wee while to get it together and actually enjoy the story and by the time I done that it was almost over.
Lost Rider is about second chances in all aspects of life.
The characters have sensational chemistry and when they do get it on HELLLLO HOTNESS!
So there is A LOT of drama in this story, there were times I didn’t like Mav at all, and I was like how are you going to redeem yourself now A*hole!
With all the heartache and emotions happening I am 100% sure every Harper fan will enjoy.
The writing is fantastic and the flow of the story is slow, I found myself in the end liking but not loving like I have other story by this author!
3.5 Stars
Arc received by publisher from net galley.


Posted by PNR Book Lover Reviews at 3:00 AM